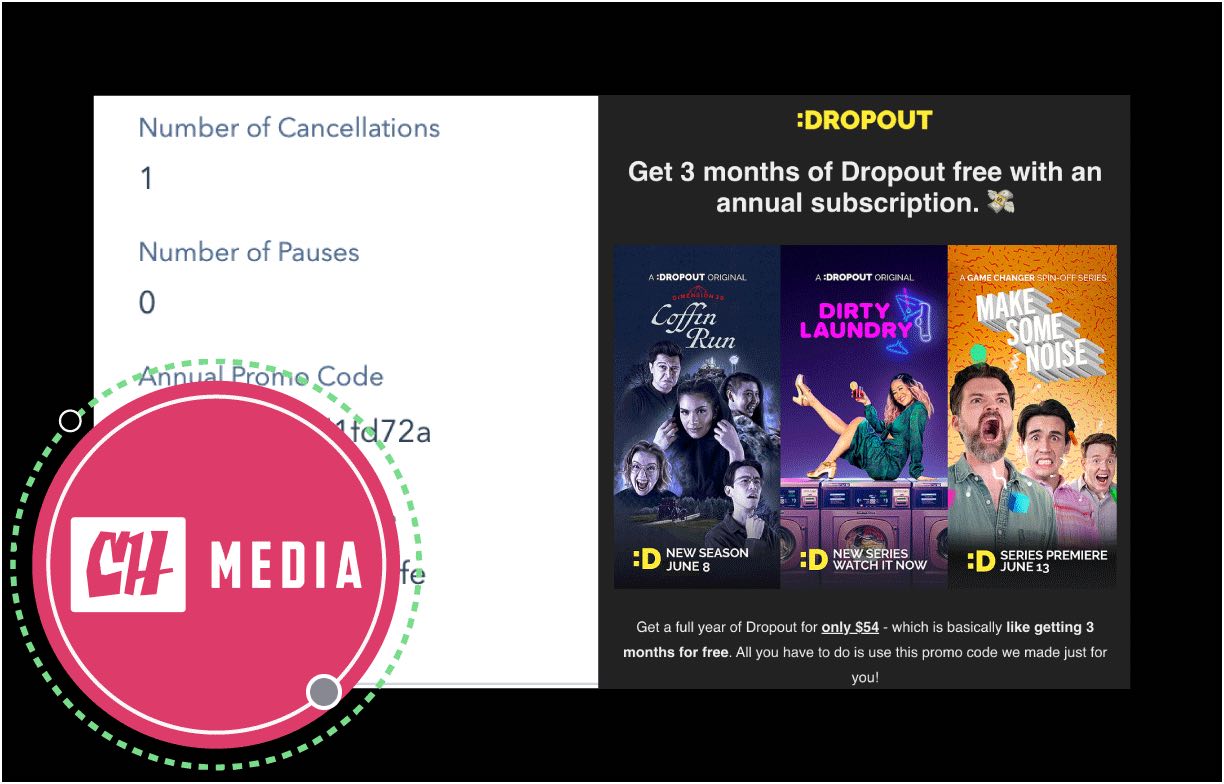 CH Media engages with an audience of over 40 million under multiple pseudonyms. They boast about bringing laughter and entertainment to their viewers through a robust sense of humor. This is evidenced in the fact that they have described themselves as a “small team of writers, producers and weirdos.”

As a result of the temporary downturn CH Media experienced, they had lost some of their client base. They wanted to win them back. They also wanted a more robust way of engaging in their customers’ journeys with methods that would allow them to delight their customers on a personal level but also allow for ease in scaling. In particular, CH Media was especially interested in preventing the loss of current customers as much as possible.

CH Media is, as mentioned above, a small team. While they certainly had the talent capable of improving their system, they did not have the luxury of enough hours in a day to meet, or possibly exceed, these goals on their own.

We began solving this by acknowledging that this company was going through a massive company pivot. They were well established in their own creative processes, and that meant that we were challenged with finding solutions that were compatible with their software, third-party apps, staff, and of course, their customers. The first solution? Integrate HubSpot with the company’s current apps, even in the face of complexity.

This integration was going to mean that CH Media could not only start working on retaining their current customers, but they could look forward to new business. CH Media would have options to build out more complex communications that would promote new subscribers, free trials, and better monitor cancellations to possibly intervene in time.

There were challenges with this goal, however. CH Media was going to have to work with multiple software products, raising the expense of the project. Through some creativity and a solid knowledge base in how HubSpot works with other software, our team was able to come up with several options for CH Media to choose from.

In the end, CH Media chose tools that allowed for the migration of data among multiple software apps, enhancing the power of each. They were able to move to automated but personalized processes to reach out to customers more quickly than they could manually. And they invested in the people who make their company run by allowing us to provide them with personalized onboarding.

With Vimeo data now in HubSpot, CH Media can more easily manage their contact list and also implement a new churn strategy.  Being able to access this contact information more easily has allowed the CH Media team to be both proactive and reactive regarding churn. Before implementing HubSpot, hundreds of cancellations were left unacknowledged every week. Today, thousands of customers who have attempted to cancel receive some form of communication from CH Media to help recoup revenue.

CH Media chose Aptitude 8 because they had learned of our reputation with advanced integration capabilities, Operations Hub expertise, and our full solutions architecture team. They were confident we could help them solve their problems while keeping their best interests in mind. That is exactly what we strive to do day in and day out at Aptitude 8. Being “Solutions Oriented” and “Relentlessly Resourceful” are two of our core values, and they were at the forefront of our work with CH Media.

What the client says...

- VP of Marketing at Webflow